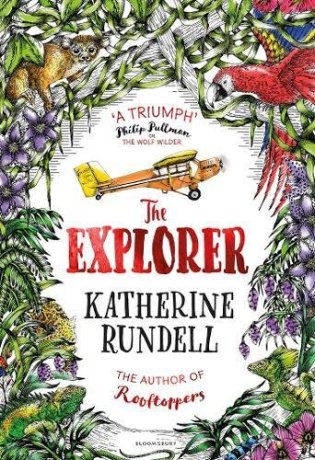 I had started bloging about another book but after finishing The Explorer by Katherine Rundell I was compelled to just let people know how good it is. For anyone asking for a recommendation for a book set in the rainforest this is that book.  (And that is coming from someone who loves Eva Ibbotson’s Journey to the River Sea)

A plane crash strands four children in the Amazon. It leaves Fred, Con, Lila, and Lila’s little brother, Max stranded and struggling to survive in a harsh unforgiving environment.  Together they search for shelter and forage for food, all the while Rundell drops hints that the story is more than this which ultimately is exactly what it turns out to be. The dangers of the Amazon leap from the pages the children lurch from moments of success and joy to moments of danger and peril. Just as we feel the children stand a chance nature comes and trips them up.  A map, found by chance,  leads them to a ruined city of secrets and the eponymous ‘Explorer’ of the title.

Rundell as she did in Wolf Wilder creates an evocative believable word and then inhabits it with great characters. The sounds, smells, flora, and fauna are vivid and tangible in the mind. The Amazon she creates is beautiful, wild and astounding. Initially I was struck by similarities to Hatchet by Gary Paulsen and that desperate human need to survive, but the characters ultimately make it a very different story.

It is the characters that hold the story together. The developing relationship between our four survivors  is fantastically done and as in Rundell’s other books is the bedrock from which she builds hers story. That she then has the confidence to throw this up in the air  in the second half of the book and challenge our thoughts about the characters and their motivations is a fantastic. Whilst I believed in all the characters I have to say that Con was the character for me, she is indeed a “Lion-heart” and it was her journey that I enjoyed the most in the story.

Rundell describes here what she wanted to achieve with the book. I have to say she absolutely hits it spot on.

I’m trying to be very careful about spoilers, as for me the joy was discovering this as it happens. Howvever the playing in the rain scene was a truly standout moment that truly evoked the idea of childhood.

It’s a cracking adventure and a great story. Go read it.

A thrilling fast-paced survival adventure with real heart set in verdant and luscious setting. Moments of peril and some really rather disgusting sounding food.(maybe that’s because I’m a vegetarian.) (8+) (A great class read for Year 4 and up)

The link below is to Bloomsbury’s Teacher writing  resource pack